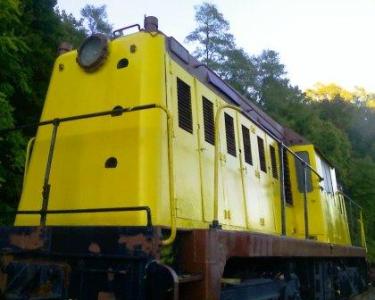 The majority of Whitcomb's 65-ton series locomotives were used overseas in WWII in the European theater and later years. No. 9 remained stateside and later served the Johnstown and Stoney Creek RR, the South Brooklyn Railway, the New York City Transit Authority (as No. 20000) and the Staten Island Rapid Transit Operating Authority. It has two 250hp Buda diesel engines and the cab roof and hoods were lowered for clearance in the NYC IND subways.

No. 9 was moved to Kingston in June, 1990. To date, No. 9 is the only operable Whitcomb 65-ton diesel locomotive in the whole state of New York! No. 9 had not been moved since Hurricane Sandy flooded the traction motors. That was, until the fall of 2015 when volunteers were able to get No. 9 moving. No. 9 made a number of runs along our mainline throughout 2016. This year 2017, No. 9 will undergo various repairs to make it more reliable.