This all-electric PCC served Boston's Green Line and was converted from single to multi unit operation in 1960. 3204 is single ended and features standee windows. It was retired in 1977 after more than 30 years with the Massachusetts Bay Transportation Authority. In 2016, 3204 received a fresh coat of paint and lights were installed inside to greet passerbys in the area at night. The paint scheme resembles closely to PCC trolley cars currently operating on the Ashmont-Mattapan High Speed Line in Boston, Massachusetts.

This series of cars were delivered between June and August of 1946. This group, 3197 to 3221, was changed from an order of standard wartime MU cars to single post-war all electrics to gain Pullman some experience in building the new design. Original assignments were South Boston (North Point) and Cambridge (Bennett St.). 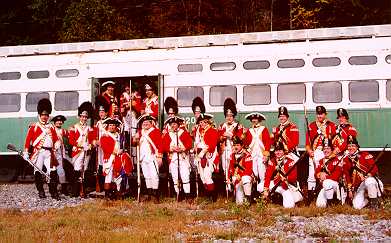 This group of Redcoats from Boston pose by a familiar car.

The cars were disliked by operators because the brakes released too quietly and quickly making them accident-prone. They were the mainstay of the Andrew-Dudley and Broadway-North Station lines until the Broadway Bridge was condemned in the early 1950s. From then to the end of service in South Boston in 1953, the cars were restricted to the Dudley Line, and some migrated to Arborway. During the mid fifties the fleet was split between Arborway and Bennett St. with many of the Bennett St. cars winding up at Mattapan, while the Arborway cars served the Tremont St. line.

The Dallas cars replaced the All Electrics at Mattapan in 1960, and they were withdrawn from service and converted to MU for the Arborway Line. The MU conversion was not too successful, and much tinkering was required to get the cars to operate properly. The problems were resolved by the mid sixties and for the next ten years the cars mostly served on Huntington Av. with one or two assigned to Mattapan. The fleet started to dwindle in 1975, and by 1978 they were all retired, with 3211 the last car in service. In addition to the car at TMNY, car 3221 is at Seashore.