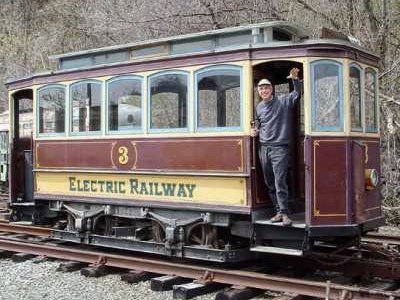 Our Vision, Mission and Goals

Vision: The museum and the trolley op­er­ation become a vital part of the growth and visitor appeal of the Kingston Water­front.

Mission: Educate people on the im­por­tance of the trolley in the development of modern urban society.

Goal 1: Conserve the museum collections, including preservation and restoration of the historic fleet.

Goal 2: Enable people to discover, enjoy, and understand the importance of the trolley and similar modes of transportation through exhibits, trolley operation and community education.

Goal 3: Significantly expand the museum's audience and strengthen its impact on both new and traditional members.

Goal 4: Bring the museum facilities and operations up to accepted standards of safety and efficiency.

Goal 5: Establish the long-term financial security of the museum.

Below we'll describe several key projects that the Board of Trustees and volunteers are pursuing in furtherance of the museum goals listed on the right. As such, they also further the museum vision and mission.

These projects are not fully funded yet, so the museum needs to combine various grant and donor sources to make them happen.

Current restoration projects will not be listed on this page, since some number are always in progress.

The museum normaiily runs one trolley car, car no. #358, which seats 28 adults. We occasionally run our interurban #120 (a gas-​me­chan­i­cal car. We realize this is a bottleneck to expanding both our capacity and revenue potential. Op­tions we're look­ing at include restoring to operation electric cars like Oslo #3, by getting a power cart to do so.

The power cart would consist of either a rechargeable battery system or a diesel gen­er­ator. This would get one electric car running, but it has the disadvantage of the need to push and pull the cart every­where the trolley goes.

Work resumed on car no. 120. A test firing of the restored engine occurred in August 2016, with mechanical work completed and exterior work expected to be complete soon.

In December 2015, the museum acquired PATH car 143 saved from the ruins of the World Trade Center. We plan to create a new exhibit space, probably as an addition to the existing main building, that will house the PATH car along with other Ground Zero artifacts. It will be an exhibit designed so people can remem­ber, learn about and reflect on the events from 9/11/2001.

It is still early in the conceptuallization for the exhibit, but it will be the biggest capital ex­pense the museum has undertaken directly related to exhibition and interpretation since the main building was erected in 1988. Watch this space for more information about the exhibit plans as they develop.

The tracks between the museum site and Downtown that run down the middle of Ferry St. (also called Rondout Landing) need repair or replacement. There are rail breaks, dips and two very bumpy turnouts. The current track condition would not allow for electrification, being that the needed rail bonding will be nearly impossible.

The preferable approach is to tear out the track and brick down to the subgrade and build it back up with new construction. In 2008, the job was estimated to cost $780,000. Also, at some point along Ferry St it would be desirable to create a run­around track so two trolleys can pass. 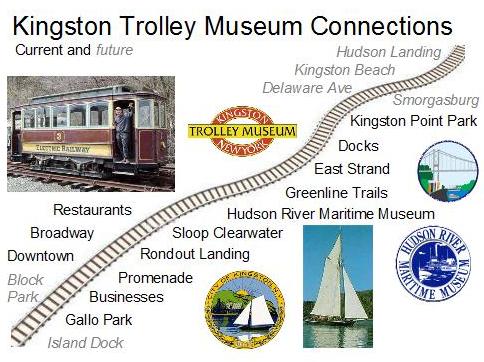 Our trolley is more than a ride to and from the museum;
it connects the entire Kingston waterfront together

We currently operate on a mile and a half of track. Even at this seemingly short distance, the trolley is sometimes called upon to get people to and from Kingston Point, supplementing CitiBus, chartered bus and private car access for special events along the Kingston Waterfront. In other words, there is demand for alternate forms of transportation in the parking-constrained Downtown area that our tracks serve.

There are exciting possibilities on both ends of the line for the track to be extended that would further increase the Museum's ability to provide circulator service during times of heavy traffic and limited parking at the Kingston Waterfront.

On the Downtown end, the track could be extended along the Promenade, about 1/4 mile in length, and per­haps even into Block Park which is nearly a mile to the west of the Museum.

In the other direction it is possible to extend north into new housing and mixed-use develop­ments proposed along the Hud­son River. Though these developments have been on the drawing board for several years, nothing has been built yet. How­ever, there is hope with the improving economy that these developments will ac­tu­al­ly break ground, making funding more likely to materialize for our line extension plans.

New: What was to become the Sailors Cove housing development was recently sold and a portion has been leased to the Smorgasburg food market, which opened in August 2016. This is on the site of the former Hutton Brick factory that had rail service for coal deliveries. If this venture is a success, it will generate more in­ter­est in alternative modes of transportation between Downtown and the Smorgasburg. TMNY will watch this carefully to see if it shakes loose funding for our rail extension. 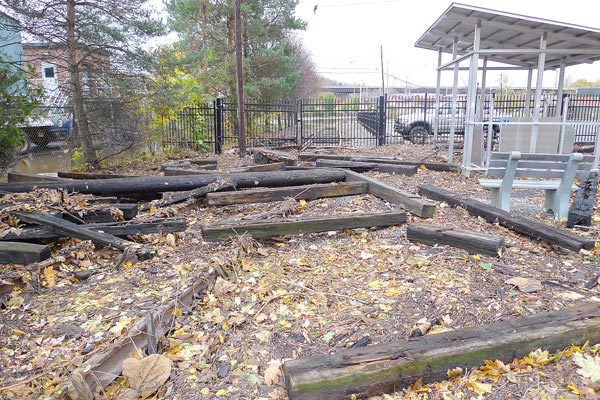 Storm Sandy piled up debris by the front gate

Remember Storm Sandy, the Frankenstorm of 2012? We sure do! The museum yard was flooded and water got into the motors and control cir­cuits of several subway and trolley cars. This caused corrosion and de­te­ri­o­ra­tion of electric components, adding more expense and time to the res­to­ra­tion of our historic fleet.

The existing building (where most of the trolleys are stored) could be made flood-proof by adding flood gates or inserts to the doors of the shop floor, plus additional grouting of the stone foundation. For the subway cars outside, they could be pushed up the hill track when a flood event is forecast. However, the only motive power on site is the temperamental No. 9 with few people qualified to operate it. In time, both the lo­co­mo­tive's reliability and availability of operators will be improved, but in the short-term, it is shakey to rely on this as the only means to get the cars out of the flood zone.

Another solution is to construct a building for the subway collection that, if positioned in the yard, is made flood-proof, or is located on higher ground. One possible site is uphill from the museum next door to Rondout Gardens (city-owned housing units). There are also potential suitable sites along the proposed north line extension, but these latter options only become possible if the north line extension ac­tu­al­ly gets built, partially or in full.

Electrification in simple terms involves run­ning a wire 18' above our tracks that's powered by 600 volts. This is important because it allows the operation of our historic trolley and subway cars. Until electrification hap­pens, we are limited to run­ning self-propelled equip­ment. When the Museum moved to Kingston in 1983, electrification of the line was next year's project. 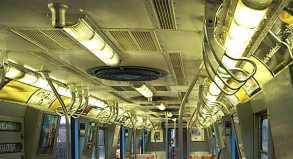 Electrification has always been the brass ring we shoot for. Unfortunately, the realities of our finances and location have held off the dream of elec­tri­fi­ca­tion.

Electrification at TMNY has been a difficult hurdle to cross for a number of reasons. The same location that blesses TMNY with a varied route that includes waterfront scenery, a historic downtown district and a supply of tourists also bristles with underground utilities, most importantly gas pipelines. Therefore TMNY couldn't just string some wire without meeting the costly requirements of safeguarding the gas lines.

As mentioned above, a possible short-term solution with relatively low cost is to use a power cart. However, even if we im­ple­ment a power cart, it will only power one trolley at a time. The ultimate plan is still to electrify the entire line allowing for multiple trolley and subway car operation.

New ties are transported and stacked for the track rehab, 2012

In 2006, the City of Kingston on the museum's behalf, commissioned a $50,000 en­gi­neer­ing study to design and estimate the costs of electrification. HDR, Inc. was chosen for the study and the final report was delivered in 2008. HDR's estimate for the project, including track upgrades, overhead, 12-pulse rectifier substation, and completely restoring a trolley is $7.1M. So, TMNY has a little bit of money to raise! TMNY still has no endowment or other long-term means to sus­tain the current operation so that will continue to be the focus of our own fund raising near-​term.

Below is the entire cost sheet from the HDR report. This is based on prevailing wages and costs, so the actual price when shovel hits dirt may vary, hopefully downward with vol­un­teers, in-kind services and donations factored in. 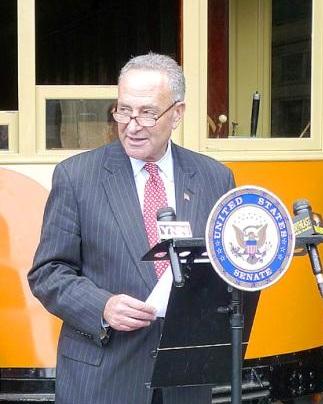 In 2009, U. S. Senator Charles Schumer an­nounced an $800,000 federal ear­mark for track up­grades is in the Trans­port­a­tion, Housing and Urban Development appropriation. This was matched with state grant of $60,000. This is the largest grant that the museum has benefited from so far in its history. None of the $860,000 goes to electrification per se, but about a mile of the existing track is updated to modern light rail standards as a prelude to eventual electrification. The money was granted in anticipation of Kawasaki's in­terest in a test track for battery-powered light rail cars in New York State, being that they have a factory in Yonkers, but this plan ultimately never materialized.

Never the less, the grant was allowed to proceed and HDR Inc. was chosen as the en­gi­neer­ing contractor. In 2012 the construction bid was awarded to Riegel Rail Solutions, Inc. Work was completed in 2013.