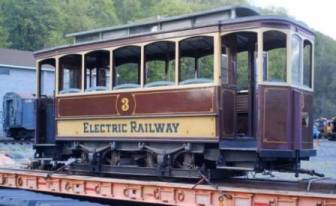 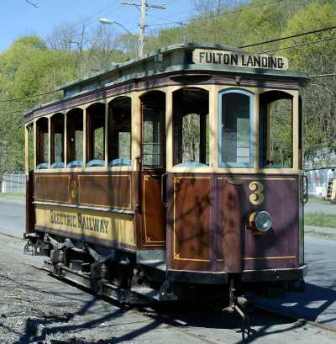 On the track along East Strand

No. 3 is an electric trolley car built in 1897 in Nuernburg, Germany. It ran in Oslo, Norway (Holmenkollbanen). It is a hand braking, single truck, double ended car. It is the oldest car at the museum, and one of but a few surviving pre-1900 trolleys in the country.

This car came to the United States about fifty years ago and underwent a res­to­ra­tion at that time. The car was last operated about twenty years ago in Brooklyn. At the point the Kingston line is electrified, No. 3 will likely be one of the first cars to run here since it was most recently operated.

The car was previously privately owned by the late George E. Hassoldt, former president of the museum.

Currently, No. 3 is brought out occasionally and placed on display at T.R. Gallo Park.