358 was originally an electric trolley car built in 1925 by St. Louis Car Co. for the Johnstown Traction Company.

Johnstown Pennsylvania was one of the last cities in the United States to abandon street railways. The last day of trolley operation in Johnstown was June 11, 1960. After which Johnstown's entire PCC fleet was shipped to South America as a spare parts supply. However, being that the remaining trolleys no longer had any commercial value most went intact directly to museums across the US. The furthest flung is No. 351 in San Francisco. 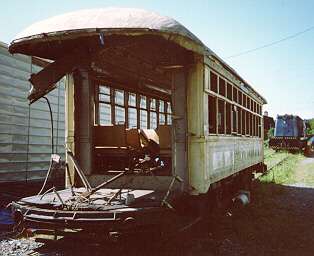 No. 358, however, was an exception. Instead of going to a museum, the car was acquired by Stone Mountain, Georgia, to run a tourist ride around the mountain. The Stone Mountain shop modified the car by removing the electric motors and controls and installed a Detroit Diesel 453 engine with an Allison transmission. Stone Mt. renumbered the car 1910 and ran it until the 1980's. The Trolley Museum of New York acquired the car in 1991 for the purpose of resting the venerable No. 120 gas car.

Beginning in 2000, No. 358 carried its first passengers in Kingston after undergoing an extensive restoration. In excess of 5000 hours of all-volunteer effort has gone into restoring No. 358, making it the largest restoration project undertaken by the museum so far. The windows, doors and other details of the car continue to be worked on to further complete the restoration, but for the time being the diesel engine will be retained since the line in Kingston is not electrified yet.