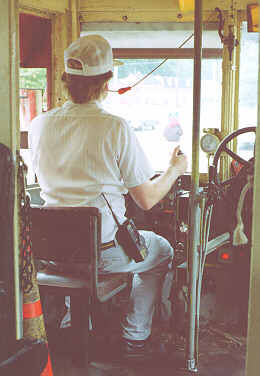 120 is a Model 55 gasoline car built by J. G. Brill. This type of car can also be called an Interurban Combine (a car for travelling between cities carrying both freight and passengers) or a Doodlebug (a self-propelled rail car).

It first served as Sperry Rail Service car No. 105, then as a Remington Arms munitions car.

Until 2000, car 120 was the 'workhorse' of the museum, being the sole car operating here since the museum moved to Kingston in 1983. Trolley #358 operated while No. 120 underwent engine repairs. As of this year 2017, No. 120 is back in service, thanks to the efforts of our Chief Mechanical Officer Harold Greenblatt, our Master Mechanic Bill Wexler, and other volunteers.

Although this particular Model 55 car was never in passenger service until obtained by the Trolley Museum of New York, it is a good example of the Interurban type rail car of the early twentieth century.